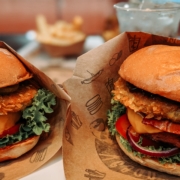 It has been 50 years since the publication of Frances Moore Lappé’s seminal food bible, Diet For a Small Planet. Ms. Lappé’s book was a consciously and conscientiously coherent treatise about the negative environmental, health and social implications of meat-based diets. Filled with facts and data, the myth-busting Diet for a Small Planet was a revolutionary book in terms of refocusing the minds of a generation of young people.

Diet for a Small Planet did not espouse the punishing minimalist rules of macrobiotic diets. Nor did it function as an advertisement for the dreariness of local health food stores with barrels of grains, thick, greasy peanut butter and ugly carrots. The book did not propose cutting out all meat. It did propose plant-based meals as viable substitutes. Diet for a Small Planet introduced the idea that plant proteins were better for you and better for the world.

Although none of the accompanying recipes contained meat, Ms. Lappé focused on the benefits of eating plant proteins relative to the sustainability issues around industrial husbandry and agriculture.

Ms. Lappé proposed meatless eating not as a strict regimen to shed pounds or avoid a stroke. Instead, she viewed diet as “a way of life” – the actual meaning of the word “diet” from the ancient Greek diaita – to keep our planet and ourselves alive and living.

The plant protein diet has taken its time, but we are now at a tipping point. Surprisingly, some of the leaders of promoting meatless meals are the some of the biggest meat-focused quick-service chain brands.

Sensitive to changing customer needs, values, attitudes and behaviors, quick service restaurant brands are taking a stand on the forefront of a food revolution. These brands see the impact of plant protein as a necessary direction in order to be competitive. In fact, a consumer foods analyst told Bloomberg BusinessWeek that quick-service food restaurants “… must have at least one plant-based product on their menus” to be competitive in the marketplace. Burger King has been (quietly) offering a plant-based burger for some time. So has Starbuck’s with a breakfast entry. Some of the more upscale burger joints have also had plant-based burgers on their menus as have some fine dining establishments.

These new entries from KFC and Chipotle address head-on customers’ changing needs, behaviors and values. It is no longer enough to have a plant-based alternative on the menu as an outlier offering. These new meatless entries are an admission that the desire for non-meat products is increasingly a driver of visits.

You can now buy a bucket of The Colonel’s chicken that is not chicken. Working with Beyond Meat, KFC has a plant-based chicken nugget tasty enough to carry The Colonel’s imprimatur. According to KFC’s US president, the new chicken-alternative nugget satisfies a growing customer need: wanting to eat less animal protein while not giving up comfort (i.e., fried) food. At the same time, the new product caters to current customer behaviors: people who have not become vegetarian or vegan but sometimes want to eat that way. The plant-based nugget also focuses on changing customer values when it comes to food: eating for health and eating for sustainability. Many data sets show that younger generations are especially concerned about the environment and animal welfare. Eating fewer meats is way of demonstrating commitment to these two important principles.

Chipotle is also addressing the sustainability issues that are part of the brand’s core essence, Food With Integrity. Chipotle decided to create its own plant-based alternative chorizo because the sausages from the meat-alternative brands had too many “unhealthy” ingredients. The new offering is made from ingredients “grown on a farm… not in a lab” according to Chipotle’s vp of culinary. He added, “… the plant-based chorizo recipe “… is uniquely Chipotle and aligns with the brand’s industry-leading Food with Integrity standards.” The Chipotle plant-based chorizo has no artificial colors, no artificial flavors, no preservatives, no grains, no gluten and no soy. Its protein is pea protein.

Chipotle’s CMO said in a statement that the new plant-based chorizo is their best-ever chorizo “… and proves that you don’t have to sacrifice flavor to enjoy a vegan or vegetarian protein.”

At the 20th anniversary of Diet for a Small Planet, in 1991, Ms. Lappé wrote that in 1971 the idea of going meatless was “heretical”. But things had changed in 20 years. Ms. Lappé pointed out at that after 20 years, there was consensus that “eating low on the food chain” is actually healthy. Additionally, she acknowledged that in 1971 it was wrong to question the cattle industry and its rules. Now, in 1991, there is recognition that the cattle industry is a large contributor to methane in the atmosphere. Further, she wrote that saying negative things about “industrial agriculture” defined you as some commune-loving, “back-to-the lander” hippy. Twenty years later, even the National Academy of Sciences was concerned about the chemicals in soil and the demise of small farms.

So, here we are at the 50-year mark. Meatless eating is not heretical. It is not wrong to question industrial husbandry and farming practices. And, going vegan or vegetarian is no longer a marker of counter-culture. Consider the 4-page color short treatise in The New York Times promoting plant-based chicken from Daring Foods. You might as well be reading Diet For a Small Planet. Under the headline, chicken is broken, “We’re not knocking how chicken tastes. In fact, we absolutely love how chicken tastes. We’re talking about unsustainable carbon footprint problems. Toxic runoff and groundwater pollution problems. And unethical factory farming problems.”

This tipping point appears to be the convergence of sustainability and healthfulness as a significant driver for younger generations. Sure, there is a profit motive: these brands are not completely altruistic. However, what we are seeing is nothing short of a food revolution. And, it is being led not by small, niche trendsetting brands, but by the big brands in quick-service chain establishments. All food brands need to take note. Meatless is not the same as other food diets because meatless today is a reflection of  ecological eating.

Brands like Beyond Meat and Impossible Foods created the openings with their offerings. But, KFC, Chipotle and the other quick service brands with meatless entries are making foods considered niche normal.